Network Monitor allows you to intercept, log & analyze data packets that applications, devices and computers exchange over network connections. This program is helpful in development, debugging and analysis of software and hardware solutions that use Local Area Network (LAN) Intranet or Internet communications. Our network protocol analyzer provides you with full set of tools for high-performance decoding of network protocols and analyzing packets data in online and offline modes. It's various editions include features for viewing, browsing, searching, filtering, recording, and data playback.

This network monitoring software provides you with wide range of visualization tools for all popular network protocols and raw data. It also has utilities for creating custom visualizers, allowing you to parse I/O data according to custom protocols definitions and rules. In addition to visualization, our product allows you to export data, record captured data to the log files, play back previously recorded data on the screen, create custom packets, send them to the port according to the rules you define and automate workflow using built-in scripting. Using custom visualizers, deep protocol analysis features and scripting you'll be even able to handle certain events. This is entirely a software network sniffing, analyzing and data logging solution that requires no additional hardware equipment.

Our network data capturing software has been developed and constantly improved for more than 15 years. It has an intuitive user interface, detailed documentation with examples and requires no special programming skills to start using it. Download this network analyzer now and start to trace network packets in a few seconds! 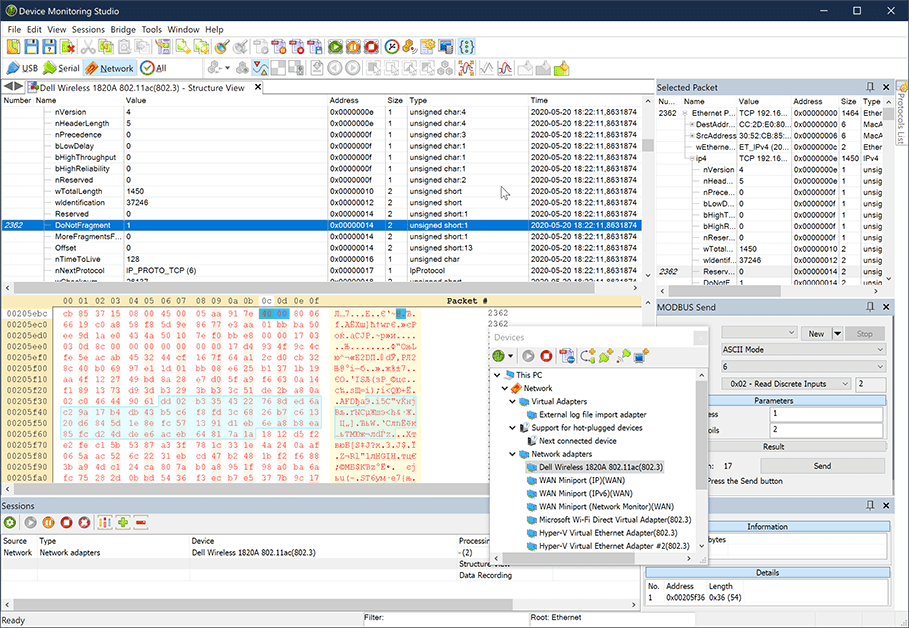 Capturing of network traffic passing through the NIC (Network Interface Controller) is performed by using a special filter driver that is installed in the NDIS (Network Driver Interface Specification) driver stack. This allows data frames to be captured starting from the Data Link Layer - Layer 2 of OSI (Open Systems Interconnection) model. Such application architecture allows capturing of all network packets passing through the adapters, including transit network packets. To overcome limitation of the Ethernet frame size set by IEEE 802.3 we support jumbo frames that are widely used, for example, in PPPoE networks.

For each running monitoring session, a corresponding session is created in the filter driver, captured data is stored in buffer until the application picks it up. Transport layer packets (for example TCP or UDP packets) are identified according to processes running in the operating system, their PIDs are transmitted to visualizers and then shown to the user, facilitating the identification of analyzed network traffic.

All the data extracted from filter driver is sent to application for further processing. Then data is parsed at the application level by binding different structures (defined in .h files) to the specific packet's offsets. This is the way network packets are parsed at the Data Link Layer (for example ARP, PPP, Ethernet packets), Network Layer (for example IPv6, IPv4 packets), Transport layer (TCP, UDP), Session Layer, Presentation Layer and Application Layer. Thus, using our product you always have a complete trace of structured data at the full depth of encapsulated protocols.

Our goal was to create a truly non-intrusive high-performance application that can process data on the fly without interfering monitored communication.

We have carefully optimized all data intercepting, processing, logging, playback and filtering algorithms to ensure that the application will run in real time, even at high transfer rates without chance to consume much processor time, memory or any other computer resources.

Our LAN traffic monitor uses highly optimized data processing algorithms that differs it from any competitive network sniffing tools and makes it, in fact, the only real-time network monitoring software for Windows available on the market today.

Our ethernet packet sniffer and network data logger can be successfully used:

This network data explorer may be successfully used as network packets decoder and communications debugger by network application developers, network administrators, security specialists and anyone who needs a comprehensive picture of the traffic passing through their network connection or segment of a local area network.

Download this software networksniffer now and start to monitor net communications in a few seconds!

Flexible Allows you to configure the way it displays raw data streams.

Friendly Allows you to tune user interface according to your requirements.

Cautious Allows you to save monitored data even after session is stopped.

I recommend your product to all of my customers as it is a key tool in the integration of our payment terminals.
Marc Pepe www.ingenico-us.com
Rating:4.5
Based on:3 reviews
Submit Your Review
All trademarks and logos mentioned on this page are the property of their respective owners.